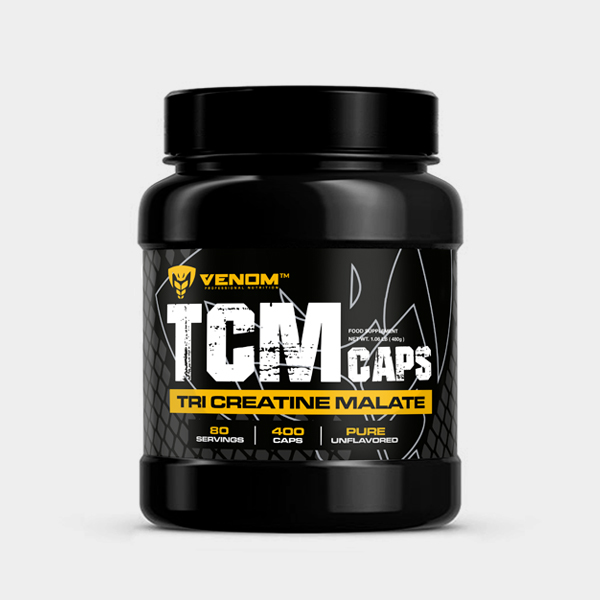 The main task of the Venom TCM Caps supplement is to increase lean mass, strength and endurance. It is designed to significantly increase exercise capacity during exercise, as well as anabolic stimulation to increase muscle mass. The supplement belongs to the group of foods for special nutritional purposes satisfying the needs of the body with very intense physical exertion. Venom TCM Caps is a creatine supplement based entirely on the most bioactive form of creatine, which is 100% creatine (tri-creatine). This creatine, when compared to traditional creatine monohydrate, is more stable in acidic gastric juice, where it does not rapidly degrade to an ineffective creatinine. This results in the storage of a significantly higher dose of creatine in the muscle cell.

Venom TCM Caps is a diet supplement that is ideal for supporting many sports activities such as bodybuilding, weight lifting, combat sports, team games, running and cycling.

During high intensity training, ATP from muscle stores is utilized first. Once this store has been diminished, you need to start generating your own ATP. At high intensities of exercise, this ATP production occurs with the breakdown of phosphocreatine in your muscles.
As we only have a set amount of creatine in our muscles, this method of ATP production runs out rather fast too. That's where Venom TCM Caps comes into play. The powerful creatine molecules in Venom TCM Caps are changed into a molecule called phosphocreatine which serves as a storage reservoir for regenerating ATP.
Supplement Facts
SERVING SIZE: 5 CAPS
SERVINS PER CONTAINER: 80
✝ Daily Values (DV) are not established.
Ingredients: creatine malate, magnesium salts of fatty acid, capsule (gelatin E171 colouring)
Warning: This product is only intended for use by healthy adults 18 years of age or older. Do not exceed recommended serving amounts or daily intake. Do not use this product if you are pregnant, contemplating pregnancy or nursing, if you have any pre-existing medical condition or if you are taking any prescription or OTC medications. Discontinue use 2 weeks prior to surgery. Keep out of reach of children.
Ta strona korzysta z ciasteczek aby świadczyć usługi na najwyższym poziomie. Dalsze korzystanie ze strony oznacza, że zgadzasz się na ich użycie.Zgoda